Motorcycle Choke: Riding With The Choke On + 9 Questions Answered 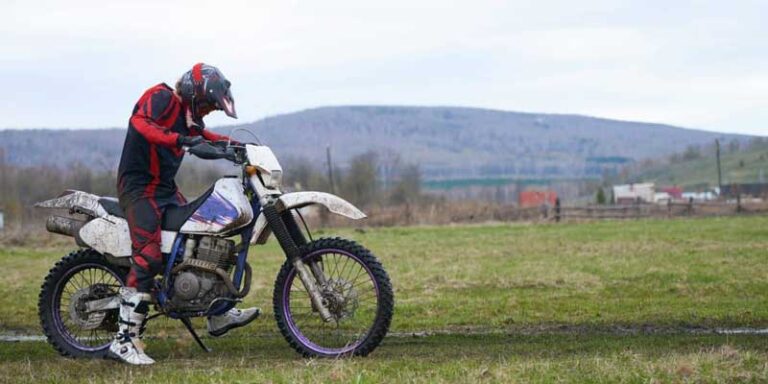 In this article, we will run through everything there is to know about riding a motorcycle with the choke on, what happens if you do if it is harmful to your motorcycle, and if there are any certain circumstances in which you should ride your bike with the choke on.

What is a motorcycle choke?

A motorcycle choke changes the air fuel mixture to help start a motorcycle engine. It works in the same way as a car’s choke does. It’s designed to make it easier for your bike to start when there is less oxygen in the air – something that can happen during cold weather or high altitude riding. The ability to change the fuel supply to air ratio inside your engine will greatly assist in starting your bike.

The choke is usually located on the handlebars, besides your clutch hand. Sometimes they can be found on the left of the petrol tank just where it meets the bars, but more often than not they are situated on the right side so you can reach them with your left hand.

A motorcycle choke basically allows a richer mixture of fuel and air into your engine when you pull the lever. This contains more petrol than the air you would breathe on a cold day, so your bike is more likely to start the first time.

When you start a bike’s cold engine with a choke fitted, it will take longer for the engine to fire up. This takes a little bit to get the air fuel mixture correct.

How to start a motorcycle with a choke?

The procedure for starting a motorcycle with a choke is simple enough. Follow these steps:

What to do if my motorcycle engine only runs on choke?

If you find your bike stalls as soon as you release the choke, this could indicate a few things. The first is that it’s time to replace your motorcycle’s carburetor. Another reason for stalling when you take away the choke is that the jetting in your fuel injection system isn’t working right. If you’ve just fitted a new exhaust system, you may need to check the backpressure.

Another thing that could stop your engine from running well when it’s cold is a dirty air filter. If this is blocked, even with fresh petrol in the tank, your bike will suffer because there isn’t enough air getting through to work properly. Make sure your air filter is clean and your fuel tank isn’t running low to get the engine started.

Why it is best not to ride with the choke on?

The result of this excess in air and fuel is that the engine will be over-fueling because there have been mixed together. The air fuel mixture is really important when getting the best performance out of your engine. Rich fuel mixture is usually a little optimal.

Overfilling the fuel mixure in comparison to air can cause a variety of problems for your bike, from it running hotter than usual to the pistons being damaged by excessive heat through misfires. This is not simply having more fuel, but to do with the ratio of fuel air mixture.

In addition to this, if you ride your bike choke on and you happen to stall the motorcycle, it can be difficult for your bike to start again. If this happens then make sure that you turn off the main switch before trying to restart as this will help preserve fuel in your tank without affecting airflow.

Removing the Choke: How long should I wait?

The amount of time you have to wait is different for each motorcycle, but it should be around three minutes to go from a cold engine to warm. After the engine warms up you’ll be able to ride properly.

In many cases, the choke will take a little bit longer than that so if your bike still isn’t starting then try turning off the main switch and waiting another minute before hitting on again. Once you can get your engine running, it will be a lot easier to ride your motorcycle.

If you have trouble starting the bike with a cold engine then make sure that you keep an eye on how long the engine is running before taking off as this can wear down your battery or cause other problems with your vehicle’s electrical system.

What Happens If You Do Ride Your Bike With Choke On?

If you ride with the choke on, it will make your motorcycle run very poorly and not start quickly. The problem is that gas can’t enter the engine as freely because of how tight or restricted the air intake becomes when the throttle is cut off during a cold start-up. This means less fuel gets to pass through so there’s more chance of fuel starvation.

Can I turn off the choke while riding my motorcycle?

It is not advised to turn off the choke while you’re riding your motorcycle, as it could cause a dangerous engine stall. The best thing to do if you realize that you’ve left on the chock is pulled over, turn off the choke and stop for five minutes before continuing with your journey so that enough time has passed for the engine temperature to increase.

If this doesn’t work, try turning down the throttle or revving up the engine till it reaches operating temperature again but don’t forget to use care when doing so!

Is it harmful to my motorcycle to ride with the choke on?

Riding with the choke on will cause fuel starvation and it can be harmful to your motorcycle. The best thing to do if you realize that you’ve left the choke on is pull over, turn off the chock and stop for five minutes before continuing with your journey so that enough time has passed for the engine temperature to increase.

If this doesn’t work, try turning down the throttle or revving up the engine till it reaches operating temperature again but don’t forget to use care when doing so!

After the engine warms up, riding should only be done with the choke off. Riding all the time with the motorcycle choke on will damage your spark plugs. Just don’t do it. A motorcycle choke is made for starting a bike, not riding it.

When is it better to ride with the choke on?

The only time it is safe to ride with the choke on, and should be considered an emergency measure if you are in a tight spot, is when your motorcycle has run out of fuel. If this happens then turn the choke all the way up so that there is no more air passing through and put as much petrol into your tank as possible before turning off the engine. This will force whatever remaining gas inside to combust – but don’t forget to use care when doing so!

Do all motorcycles have a choke?

No, not all motorcycles have a choke, some bikes can warm a cold engine without a choke. If you’re riding an older model however then it is possible that the choke might be there but will just be set to ‘on’ by default so it can’t easily be turned off and could cause problems if disabled.

Newer models, are usually designed with better fuel-saving features, such as Electronic Fuel Injection (used in every fuel injected motorcycle), that allow for an easy startup without using the choke as often. Most fuel injected bikes do not have a mechanical choke either.